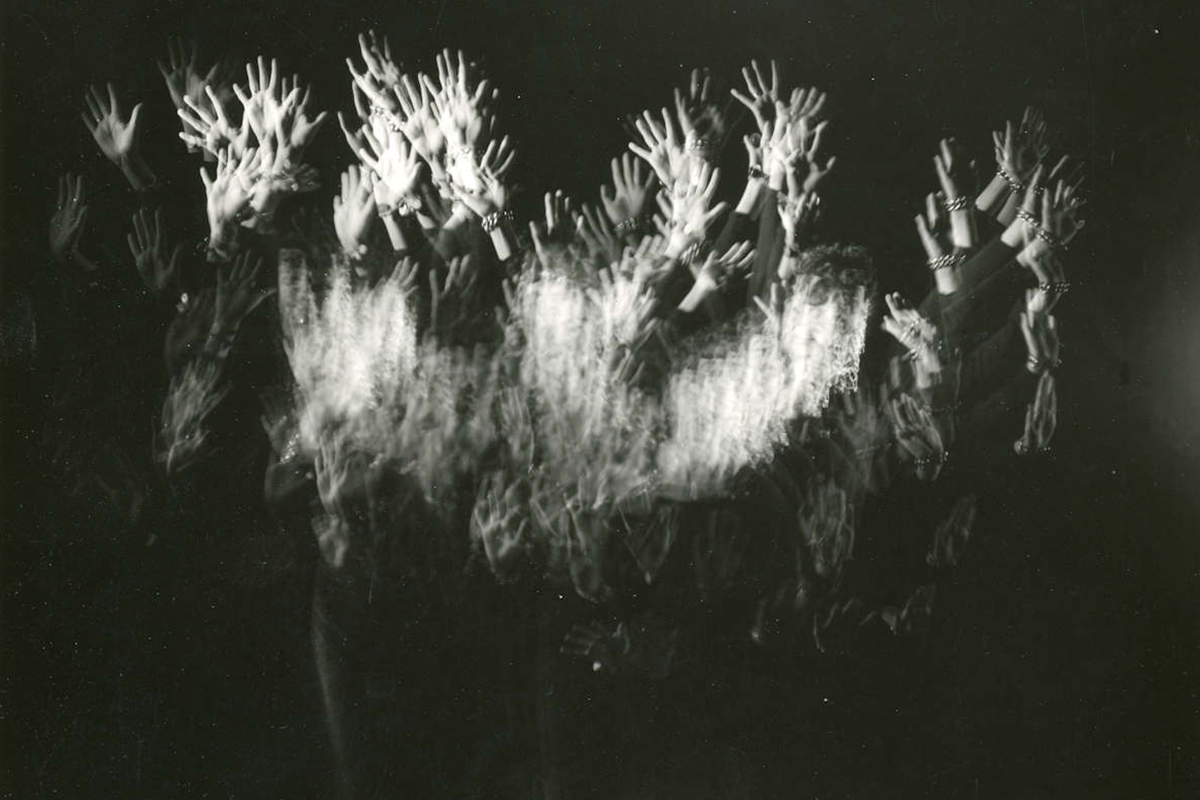 Inspired by his time in Paris studying with the photographer Man Ray and surrounded by the influence of avant-garde artists — and likely later the work of American electrical engineer and photographer Harold Eugene Edgerton — Herbert Matter spent the late 1930s and ’40s experimenting with light and motion. Here are three of his photographs that I keep coming back to in my research.

In Hands in Movement, it is 1939, and Mercedes Matter is clapping. (At the time, she was still Mercedes Carles. The couple wouldn’t marry for two more years — or receive Jackson Pollock’s first drip painting as a “wedding present” for two more after that.) It’s really quite an intriguing photograph. Mercedes’ likeness cannot be found. She exists only as open hands, as distorted layers of light, as a visual representation of a repetitive sound. Aside from her hands, the only other discernible shape is her bracelet by sculptor Alexander Calder, a close friend of Herbert’s. Her sleeves blend into the background, and everything else is darkness. Mercedes becomes rhythm, and she is gone.

While shooting with long exposure requires a completely still camera to capture a crisp image, Man Dressing is a frenzy of motion. Every action required for putting on one’s clothes is recorded by a continuous string of light, replacing the image of a man with an almost cartoonish and chaotic outline. The result is not so different from many illustrations by Abstract Expressionist artists. It's kind of genius.

In Figure in Motion, 1939, Mercedes is dancing with a cloth, wearing a long dress. In this photograph — which I believe was taken in the same session as Hands in Movement — you can see her face, but it's abstracted. Mercedes appears weightless, levitating. Her cloth and the hem of her dress are immaterial, almost ghostly. This moment was perhaps a nod to modern dancer Mary Wigman, of whom Mercedes was a fan. Where Hands In Movement feels lively, Man Dressing feels ironic. But Figure in Motion is deeper, emotional. There is something about this photograph that stays with me hours after I’ve closed my laptop; it moves me.

Research Update: Some of you were asking, so I thought I'd mention that a few of the resources I’ve been looking for will be arriving soon — namely work by Pepe Karmel (MoMA) and the Mercedes Matter book I mentioned in No. 2: Jailbirds. A friend and subscriber gave me a lead on a copy that came on the secondhand market at a fraction of the usual price, and my sweet family surprised me with gift cards for my birthday this week to help me get it. Thanks everyone!