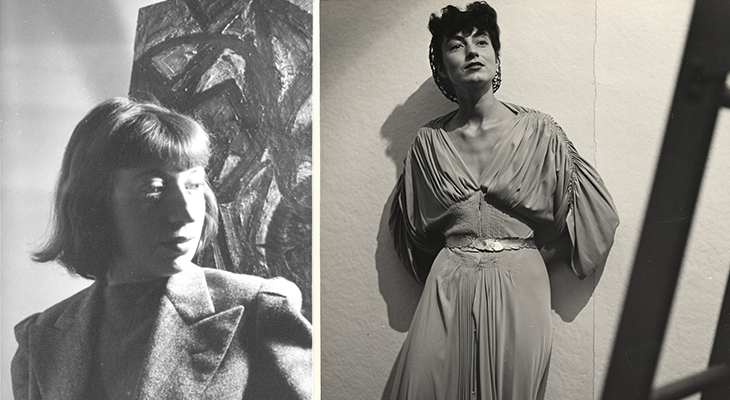 On December 1st, 1936, Mercedes Carles was arrested for disorderly conduct. Hundreds of artists marched up New York’s Fifth Avenue that afternoon in a protest organized by Lee Krasner and the Artists Union. Carles was picked up for her involvement. Having recently been introduced to the ideologies of Marx, Lenin, and Trotsky, this was Carles’ first foray into social justice demonstrations. The protestors sought continued funding for the Federal Art Project, which had created employment for artists during the Great Depression. Krasner, and over 200 other artists, were also apprehended that day in the city’s largest police bust (at the time).

Despite having close mutual friends—namely the painter Arshile Gorky—and both participating in the Federal Art Project, the women didn’t meet until they landed in the same jail cell. Carles had never seen the inside of a jail before. Krasner, an ardent activist, prided herself on having seen many of New York’s finest. Carles, the daughter of an American modernist painter and a French actress and model, had attended finishing schools in Europe and the US. Krasner was born in Brooklyn to Russian-Jewish immigrants and graduated from public school. Different as they may seem, “the two women had so much in common that their time in jail was as much introduction as reunion. When their cell door opened, they emerged best friends” (Gabriel, Ninth Street Women, 2018).

Within months of their first encounter in the 57th Precinct, Krasner enrolled at the Hofmann School of Fine Arts, where Carles had studied on and off before she started painting with Gorky. Hans Hofmann, the school’s founder, remained an important influence on both women’s work long after they had left his school. In 1938, French painter, sculptor, and filmmaker Fernand Léger introduced Carles to Herbert Matter. Krasner was a frequent guest at Herbert and Mercedes’ home after they moved in together the following year. When the couple married in 1941, Krasner was among the few non-family guests at their wedding.

After receiving an invitation to exhibit one of her paintings in John Graham’s French and American Painters show (to open in January 1942), Krasner was ecstatic. Her work was going to be shown in a gallery with paintings by Picasso, and Matisse along with artists from her circle like Willem de Kooning. But there was one name on the program she had never heard before: Jackson Pollock. Upon learning that she and the little known painter from out west were neighbors, Krasner decided to knock on his door. And then, the Matters didn’t see her for weeks.

Krasner was enthralled by Pollock—his art, his looks, his charm. While most tellings of Krasner and Pollock’s early days together include Lee being absolutely blown away by his work, in at least one account by Mercedes, Krasner tried to pass Pollock off as a carpenter. The night she first introduced him to the Matters is best recounted through Naifeh and White Smith weaving together interviews and recollections of Mercedes, Herbert, and Lee in Jackson Pollock: An American Saga: the women left the men to bathe the Matter’s infant son and let the men “find their voices” after trying to engage them in conversation. To their dismay they could not hear any voices from the floor below and started to panic. But “in the silence, the two men were laying the foundations of a close friendship. ‘After the women disappeared,’ Herbert Matter remembers, ‘Jackson said, “It’s a really wonderful time to be living.” That gave us plenty to think about the rest of the evening’.”

From that night on, the couples remained close, recalled by many as lifelong friends. Despite their unconventional introduction as cellmates, Mercedes and Lee formed a strong bond that extended to include their husbands. Their influence in the '30s and '40s helped to usher in a new movement and position women as leaders in the American art world. Mercedes would go on to teach and found the New York Studio School. Lee would throw herself into supporting Jackson's career, and she'd emerge as one of the most important painters of the Abstract Expressionists.

While there are (thankfully and rightfully) dozens of books available on  Lee Krasner, it is considerably more difficult to find reliable sources on Mercedes Carles Matter. So far I have found one, single, solitary book on Mercedes Matter that goes for over $1,000.00 in resale markets. It's available for reading room use only at the San Francisco Public Library, which is complicated by COVID-19, and I've yet to get my hands on it. I'm working on tracking down Mercedes' archives if they were indeed saved or placed with an institution. If you're interested in viewing some readily available archival material, definitely check out the Lee Krasner and Jackson Pollock's papers through the Smithsonian's Archives of American Art.
‍

‍
All images were sourced from Jackson Pollock and Lee Krasner papers, circa 1914-1984, bulk 1942-1984. Archives of American Art, Smithsonian Institution.