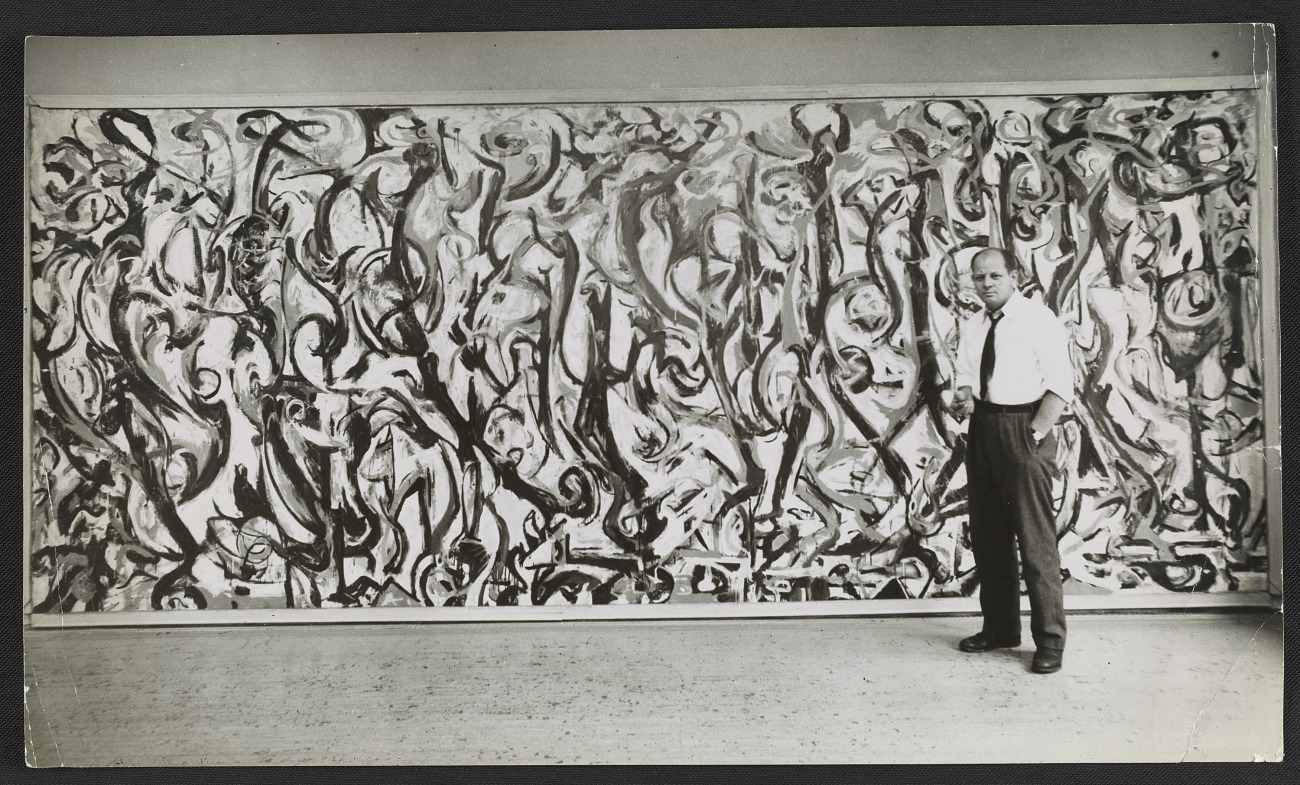 In the photograph above, Jackson Pollock stands in front of his painting Mural (1943). A commission for the townhouse entryway of prominent art collector Peggy Guggenheim, this would be his largest canvas and a seminal work that art historians would write about endlessly and fans could purchase reproduced as an iPhone case some 75 years later. It is, to say the least, a big, important painting. What I care about, though, is that this photograph was taken by Herbert Matter at The Art of This Century gallery in 1947.

Matter was a Swiss-born photographer, graphic designer, and filmmaker. If you’ve not heard of him, don’t feel bad. I’d been working in and around the graphic design industry for almost a decade when Letterform Archive received a portion of his archives in spring 2019. And before I started cataloging that collection, I’d barely heard his name.

As I unpacked file folders full of sketches, ink drawings, and photographs for clients like New Haven Railroad, Plus magazine, and Knoll, I started to piece together the boundlessness of Matter’s talent and the magnitude of his influence on mid-century art and design. It seemed insane that I hadn’t heard of him before, and I became obsessed.

You’d think finding resources on the man who assisted A.M. Cassandre (one of the most influential artists and type designers of the early 20th century), was the in-house photographer of mid-century design’s power couple Charles and Ray Eames, and pioneered using photomontage in commercial art would be relatively easy. It’s not.

Aside from a handful of design website biographies, most of the articles on Matter are written by one design historian, Kerry William Purcell. There’s an exhibition catalog of his photography that San Francisco’s library system doesn’t carry. (When I was alerted to its restock by an online bookseller, it cost upward of $900.) I found one monograph on him that was widely available, but it was in German.

I watched (and rewatched) Reto Caduff’s documentary The Visual Language of Herbert Matter which pays special attention to Matter and his wife Mercedes’ close friendship with Jackson Pollock and Lee Krasner (a fellow painter and Pollock’s wife).

Matter and Pollock’s friendship was barely a footnote until the “Storage Bin Pollocks” controversy of the early 2000s — in which the art world heavily debated the attribution of drip paintings labeled “32 Jackson experimental / Works (gifts + purchase)” found by Matter’s son in a family storage unit. And even then, in the news coverage, Matter was most frequently referred to as a "long-time acquaintance of Pollock.”

For the first season of The Creative Friendships Project, I’ll be sharing monthly updates on my research into that fourteen-year friendship. We’ll explore how some of Pollock and Matter’s most important works were influenced by their relationship and dive deeply into the philosophy of friendship and its importance for creators.

This project's been a long time in the making, and I'm so excited to share it with you. Thank you for being here. Follow along by subscribing, share it with a friend, and reach out anytime.
‍

Photograph of Jackson Pollock in front of Mural (1943) taken Herbert Matter in 1947 was sourced from Jackson Pollock and Lee Krasner papers, circa 1914-1984, bulk 1942-1984. Archives of American Art, Smithsonian Institution.

I took the photo of the cut and pasted S in 2019 at Letterform Archive.

The image of Plus Magazine Cover designed by Herbert Matter in 1938 was sourced from herbertmatter.org.